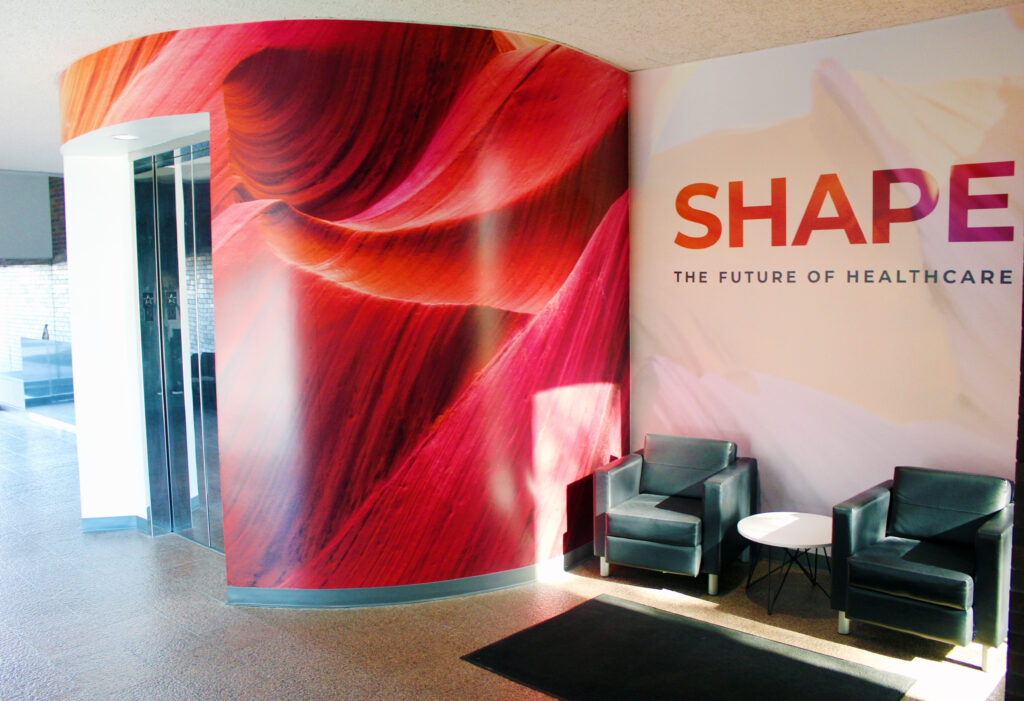 In 2020, Waystar acquired eSolutions, which created a need for a complete office rebranding in their Kansas City – Overland Park office.

“Our goal is to make things consistent throughout every single one of our offices across the United States,” associate creative director Bri Gannon said.

Freedom also provided a biophilic moss wall, manufactured through Fat Plant Society, using preserved reindeer moss, in two separate locations for them.  The first is down a hallway and then the other is behind the reception desk.

“The one behind the reception desk actually has their logo in front of the moss, which is a really cool and different application,” interior designer Alicia Pellen said. “We’ve actually started gathering a lot of interior design inspiration from this project and are doing similar designs for other projects that we are working on.”

Freedom Interiors was introduced to Waystar through former eSolutions employees that had had positive experiences with Freedom.

“Not all companies are willing to work so collaboratively with a creative team because sometimes they have that in-house already and they want to utilize and obviously provide their expertise.  So, it was an integral part of this process that Freedom collaborated with our team,” Gannon said. “Freedom Interiors not only collaborated with us, but exceeded our expectations regarding options of things that were doable and within our budget.”

Throughout the process of the project, there were a number of issues ranging from a global pandemic to supply chain issues. Freedom kept open and constant communication with the client, giving them weekly updates and schedule adjustments.

“Freedom was perfectly equipped to handle our fast pace. At Waystar, we set high expectations and we’re proud of that.  The timeline in which we wanted to get this project done and the resources we were providing for the project, they were able to take that and say ‘OK this is our team.  This is what we’re doing.’, and we were able to get the project done within our timeline,” Gannon said.